A glimpse behind the curtain: SMK National Campaigner Awards 2022 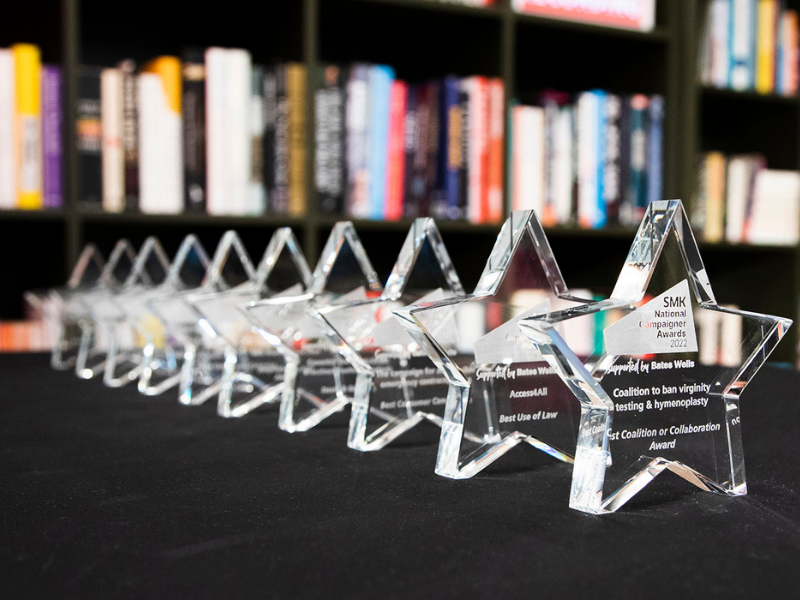 As the Sheila McKechnie Foundation’s newest employee, last Thursday I attended my first SMK National Campaigner Awards. Having a glimpse ‘behind the curtain’ spoiled nothing and I can honestly say it was a night of magic the Wizard of Oz could only have dreamt of.

Before the first award was presented, the Tortoise HQ was already abuzz (thanks for hosting!).

As you’d expect when you fill a big room with campaigners, there was no shortage of chat. What was most notable in those early moments is how happy everyone was to be together. Smiles for the camera, smiles when greeting old friends, I don’t think I saw a glum face all night.

So, here are my highlights from a night with no lows:

He might have a Netflix documentary about hating him, but I have nothing but love for Peter Tatchell – this year’s deserved recipient of the Lifetime Achievement Award.

For those who don’t know, Peter’s campaigning spans over 55 years. Baroness Barker summed it up perfectly: ‘Peter is an absolute pain to people in power and that’s what makes him great.’

Despite being best known for his work on LGBT+ rights, Peter has campaigned excellently on issues ranging from democracy to animal rights and everything in-between. Accepting his award Peter said, “Of course, I am one among many. It’s we together that make the change.” Before dedicating the win to those suffering in Ukraine and Syria.

The guy is pure class. You can watch Baroness Barker’s tribute to Peter’s work here.

Sorry, I couldn’t help it. Who at this point doesn’t know our Young Campaigner of the Year – Kwajo Twenboa? He’s the guy who’s got Westminster shaking in their boots, and everyone patiently waiting to shake his hand (me included).

What he’s done in this past year for those in dire housing conditions is nothing short of incredible and I honestly can’t think of a better role model for young people looking to get into campaigning.

I know I said this to you about a million times on the night, Kwajo, but well done.

From London to Coventry

The first winners I met at the door were the amazing campaigners from Coventry Youth Activists (CYA). These young forces of nature won our David & Goliath award for taking Facebook to task in their #FacebookHasNoStandards campaign.

Representing CYA on the night were Joey and Amanda, who by all measures are inspirations and first-class campaigners.

It was hard not to be gripped by their acceptance speech. Joey said:

“As the story goes, David has to show courage to come forward and take on things throughout the world, and every single day each member of CYA, as a group and as individuals, has to show great courage, even sometimes just to leave their homes, let alone work or try to make a difference.”

I loved scrolling through Twitter and finding out that, not wanting to miss the fun, the rest of CYA were celebrating their win together back home.

Trust in the Trustees

We’re incredibly lucky at SMK to have a board made up of people you’d want to introduce to your mates. Perhaps more relevant, they’re all incredibly caring, intelligent, and competent.

With that in mind, you can appreciate how lovely it was for us to see them all so obviously enjoying themselves (made even sweeter by not having to take minutes).

But don’t take my word for it, here they all are loving life.  I hope it doesn’t need to be said but we appreciate all you do for us.

SMK Board of Trustees

OK, this isn’t actually an award. But you can be 100% sure everyone in attendance knew who would have won it. Joel Mordi, campaigner from the Safe Routes Save Lives campaign, which won our Amplifying Voices award. One person said, ‘I feel like I’m at the Oscars!’

Honestly, the only thing more impressive than this outfit was their campaign, which you can read about here.

Honorary mention: It seems a shame to talk about clothes without mentioning the Awkward Squad t-shirts being sported by the SMK team, a reference to Sheila herself who proudly referred to herself as a ‘fully paid-up member of the awkward squad’.

Last on the night, but definitely not least

Best person I think I’ve ever met and a testament to the fact that great people doing great things will always ruffle feathers – and then some. If you haven’t guessed yet, I have a lot of love for this year’s Campaigner of the Year, Jack Monroe.

Jack is a food poverty campaigner, cookbook writer, and all-round good egg. I think it’s fair to say Jack doesn’t seek the spotlight, it just keeps on finding her. When she’s in it though, she uses it to create some much-needed havoc (in a good way and to great effect).

Here’s what Jack had to say:

If you didn’t join us live you can watch the full Awards ceremony here.

Below are some of my favourite snaps of the night:

Winners of the Best Coalition or Collaboration Award 2022

Winners of Best Use of Law , the amazing Access4All

Seth is the Policy and Research Officer at SMK
← Previous article