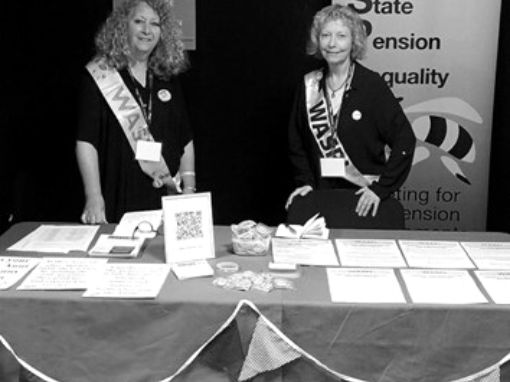 WASPI’S gas grant helped support their lobbying and legal work – the two most important aspects of their campaign. Since receiving the grant, they have seen huge changes in Parliament, and have had to ride the waves to remain relevant amidst all the upheaval.

They used the funds to run an MPs drop in in Westminster in 2019, prior to the Conservative leadership challenge, and subsequently a General Election. They used the services of Connect to facilitate this drop in, with the support of Carolyn Harris MP who sponsored the room on their behalf. Over 120 cross-party MPs attended and signed a pledge to seek a fair solution to the WASPI issue. For the event, factsheets were produced and a large UK map enabling MPs to put their ‘wasp’ on the map.

With the calling of a General Election, the Campaign had to change approach and lobby hard to be included in the party Manifestos. They were successful in this with a commitment to 1950s women being documented by all parties but the Conservatives. A shame, considering Labour pledged £58 billion to settle the WASPI issue.

Once again as a Campaign, they re-planned their strategy.  With an 80-seat majority for the Conservatives they know they must lobby every last conservative politician and sustain the interest of other MPs of other parties. They continue to remain committed to the campaign.