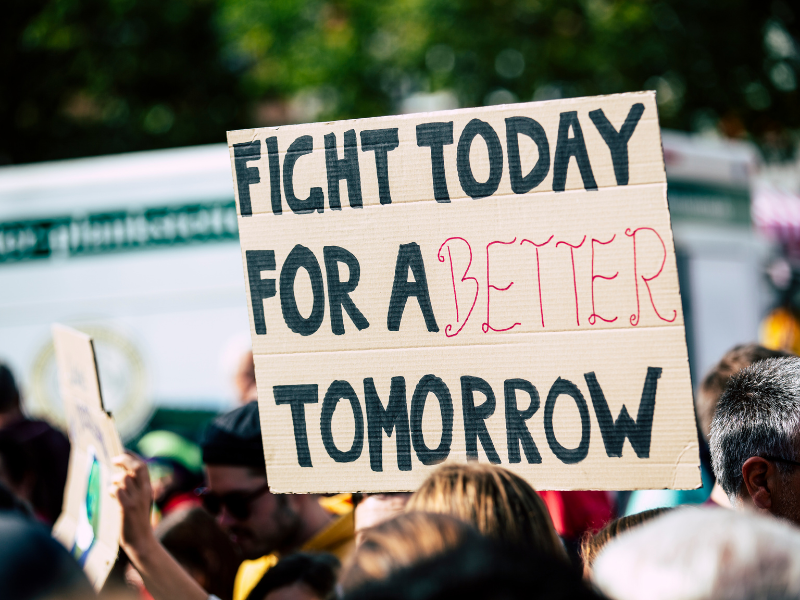 What do a well-known singer and a Scottish youth activist have in common?

Both of them have recently exercised their democratic right to protest.  Will Young wanted to raise public awareness about animal testing by protesting against dog breeding for laboratory research in Cambridgeshire.  Meanwhile, Grainne McGinn was frustrated that disabled youth voices were being excluded from the urgent conversation on climate change at the international summit in Glasgow.

Protest is a democratic right

Protest is the right of everyone – like Grainne and Will – who has a cause they believe in.  And as individuals, they are entitled to protest in the way that suits them.  Grainne carried a placard as one of 100,000 people who braved the Glasgow rain to mark a Global Day of Climate Justice, where the mood was lifted through people playing live music and chanting.  Contrastingly, Will’s protest involved handcuffing himself to the entrance gates of a dog breeding facility.

Campaigners newsflash!  Proposed new legislation currently being pushed through Parliament could  seriously restrict or stop both these kind of protests happening in the future.  The Policing Bill (or to give its full title, the Police, Crime, Sentencing and Courts Bill)  is one of the most serious threats to human rights and civil liberties in the UK’s recent history. This government is seeking to criminalise those who take to the streets (or take part in static protests) to make their voices heard and demand a better world. Under the Policing Bill, the mass protest that people like Grainne was part of, could have been penalised for being noisy.  Recently added amendments to the Bill could see people like Will facing a prison sentence of up to a year for the offence of ‘locking on’.

Key clauses relate to noise and serious disruption Part 3 of the Policing Bill is a chilling attack on freedoms we should be able to take for granted in a democracy – the right to express our point of view and stand up for what we believe in. It enables the Home Secretary to choose which protests are legal, and it gives the police the Police powers to ban them because they are noisy or disruptive.  Yet it is exactly because we live in a democracy that people protest. Protest is a democratic procedure and is a fundamental human right as defined by Article 11 of the Human Rights Act. It plays an essential role in giving voice to individuals and groups, enabling them to share views and opinions, expose flaws in governance and publicly demand that the authorities and other powerful entities rectify problems and are accountable for their actions.

Recent protests that could be deemed too noisy or inconvenient include the April football fan protests against the European Super League (ESL).  The ESL would have seen leading football clubs break from the pyramid of English football and play only select “elite” clubs from around Europe. Football fans chanted, congregated and disrupted the starts of domestic games to defend the future of their clubs. Importantly, the protests resulted in the clubs involved backing out of the ESL.  The Football Supporters’ Association recently voiced their concern that the Bill could also silence football fans at match day ‘walk-ups’ when fans traditionally make noise and chant to create a celebratory atmosphere as they congregate before passing through the turnstiles.

More information on the full implications of Part 3 on protest is available from Police Bill Alliance members Friends of the Earth and Quakers in Britain.

The human rights organisation Liberty – another of the organisations campaigning against the Policing Bill –  is particularly worried at the slew of new amendments to the Bill which create brutal new powers to shut down protest and stifle dissent. These amendments create new offences, increase sentences for existing offences, expand stop and search powers, and establish draconian new Serious Disruption Prevention Orders (SDPOs) that could effectively ban individuals from participating in certain protests and restrict their freedom of movement and expression. In the context of a Bill that is already being rushed through Parliament and experiencing significant delays in the House of Lords, we are extremely concerned that these new amendments will not be afforded even the limited parliamentary scrutiny that other aspects of the Bill have had, having been introduced at such a late stage in the process.

Liberty says,  ‘protest is a core pillar of any healthy democracy. These new powers are a threat to our rights, and an opportunistic move from a Government determined to shut down dissent, stifle democratic scrutiny and make itself untouchable.’  More from Liberty here.

Opposition to the bill is broad, diverse and growing

Diverse opposition has emerged since the Bill was introduced to Parliament eight months ago. Senior police offices have said they didn’t ask for new laws to crack down on noisy protests.  Over 660,000 people have signed a petition against the Bill coordinated between human rights groups, environmentalists, Gypsy, Roma and Traveller advocates and other charities.  A show of strength from across civil society resulted in 350 charities and other organisations signing a letter calling for the Bill to be scrapped.  Separately, 30 faith and beliefs leaders spoke out about the Bill’s chilling impact on our civil liberties.  International attention has resulted in three UN Special Rapporteurs warning that the Bill threatens our rights, whilst the global watchdog Civicus Monitor have placed the UK on a human rights watchlist.

Voices across the political and business spectrum are now raising the threat to our freedoms and civil liberties.  Parliament’s Joint Committee on Human Rights said the Bill’s proposals are ‘oppressive and wrong’.  In an opinion piece, former Attorney General Dominic Grieves joined a number of other moderate Conservatives who are growing uneasy about the draconian nature of the Bill, in citing the Bill as a direct threat to our democracy. And Dragon’s Den presenter and businesswoman Deborah Meaden declared her unequivocal opposition, saying ‘if Priti Patel pitched the Policing Bill, I would loudly declare myself out’.

What you can do

As the Bill makes its final passage through parliament, I hope campaigners UK-wide will loudly declare themselves part of the campaign to oppose the bill.  Please sign and share the petition against the Policing Bill and share your protest stories with the Police Bill Alliance on twitter.

Kathleen Christie is currently the convenor of the civil society response to the Police, Crime, Sentencing and Courts Bill through the Police Bill Alliance (PBA).  The PBA is an informal alliance of organisations opposing the Bill’s assault on freedom, rights and marginalised communities.