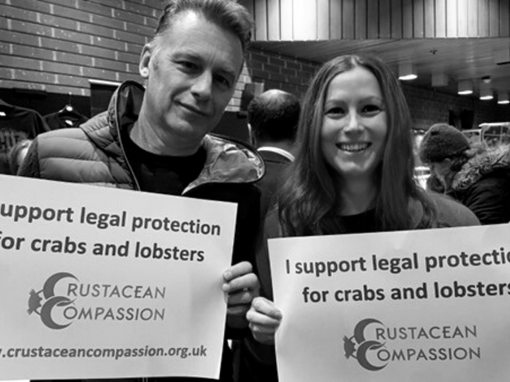 Since receiving the grant, the Crustacean compassion campaign has succeeded. Decapods are now legally recognised as sentient (that is, capable of feeling and experiencing sensations such as pain and pleasure) and are protected in all relevant animal welfare legislation in the UK.

Their campaign has, and continues to, gain a lot of traction – with over 60,000 people wanting decapod crustaceans protected in UK animal welfare law as shown by the signatures on their public petition. They have also shown that the experts agree – their open letter has been signed by eminent scientists, veterinary professionals, lawyers, actors, comedians and wildlife experts, including the RSPCA and the British Veterinary Association, asking the government to protect them in animal welfare law.

Thanks to ther work, Defra commissioned an independent consultation on the ability of decapod crustaceans (and cephalopod molluscs like octopus) to feel pain; and on the impact of industry practices on their welfare. This report was published in November 2021, with the clear conclusion that decapods are sentient and need legal protection. Following the strong outcome of this report, the government added decapods to the Sentience Bill. The Humane Slaughter Association has also commissioned a piece of research worth £1.93 million that includes research and development into humane methods of slaughtering crustaceans.